I went to a Methodist school in Melaka and wanted to become a Christian. My father suggested that I attend the Sunday Dhamma School at Seck Kia Eenh (SKE) to learn Buddhism first, which I did for a year in 1987. The basic teaching of kamma I learned was enough to remove my desire to become a Christian. However, I was puzzled about Amitabha and Kuan Yin, because I only learned of Siddhattha Gotama in my Dhamma classes.

While attending college in the US, I joined the Buddhist Society and was confused with some of the discussions. For example, the 6 parami was discussed but I was taught 10 in SKE. I also heard the terms Mahayana and Hinayana for the first time. I thought to myself, “How can Mahayana be more superior when it has fewer parami compare to Theravada?”

After I started working, I occasionally read books from various Buddhist traditions. I found more differing teachings such as relying on external means for salvation vs self-reliant; and Buddha nature, True Self or Higher Self vs anatta. I was quite confused.

In early 2012, a Chan (Zen) lay meditation group that I joined was planning to start a youth class. I thought of suggesting a few Buddhist songs that I had learned at SKE to them. Therefore, I asked my eldest sister to send me some CDs with Buddhist songs. When I received the package, there was a set of 4 English Dhamma CDs by Venerable Dhammavuddho, which I didn’t expect to see. The set consists of 1 Introductory, 1 Advanced, and 2 Anguttara Nikaya talks. At that time, I had actually decided to quit the Chan group; I noticed questionable practices. Hence, I was more interested in the Dhamma CDs than the song CDs.

Having been a so-called Buddhist for 25 years, I thought I was more than a beginner level and skipped the Introductory CD. As I listened to the Advanced CD, I was stunned by how little I actually knew. At the same time, I was delighted to learn so much new information in such a short time. These talks are comprehensive, concise, and contain many sutta references; I appreciated the speaker’s dedication to teaching. I was also impressed with his intimate knowledge of Buddhism and other religions. After listening to a few talks, I realized I had to relearn Buddhism. I switched to the Introductory CD and just mere seconds into the first talk, I heard, “A lot of us have been told that the Buddha was the son of a King, and this is not true.” Boy, was I glad these CDs found their way to California!

As it turned out, when my sister bought the Buddhist song CDs at Buddhist Maha Vihara in Brickfields, a lady there highly recommended the Dhamma CDs to her and she took a set. This fortuitous encounter is my defining “blind sea turtle, coming to the surface once every one hundred years, and would stick its neck into the yoke with a single hole” moment! (Samyutta Nikaya 56.48).

When I called Vihara Buddha Gotama (VBG) in Dec 2013 to inform of my plan to visit, the first question I was asked is – Do you know about the Nikayas? – Yup, without a doubt, this is the voice of Bhante Hye! I visited VBG three more times and each time, I brought along a laundry list of questions. In my most recent stay in January 2017, I asked many questions on the Conditioned Arising of Suffering (CAS) article, and Bhante readily answered and clarified them all for me. A day later, Bhante told me he was revising the CAS article and asked if I would like to review it when it’s done. Upon hearing those words, my heart leapt – of course, I would! I had come this far in the Dhamma because of Bhante’s guidance. It is an honor for me to contribute in this way. Whenever I recollect this merit, joy fills my heart. I know of an Italian nun living in New York who started listening to Bhante’s talks after reading his CAS article.

On the rare Christmas Full Moon of 2015 (a full-moon Uposatha), Ven. Nyanaramita Mahathera (German monk visiting from Sri Lanka, 50+ vassa), Tan Khantipalo, Ah Wong (VBG Secretary) and his daughter, our superb driver and co-driver, and I; 7 of us in a van; left VBG around 4am to attend a Sanghika Dana in Penang. We arrived just before 7am. I had never seen so many monks (about 40) in a gathering before. For me to attend such a huge Buddhist event in Malaysia is quite remarkable. After lunch, we stopped at 2 Buddhist temples before heading to our final destination – VBG Cave! I had heard of the cave from Bhante’s talks and seen pictures online, but never did I think that I would get to visit it someday. This is incredible! After a good exercise hiking uphill to VBG Cave, we were greeted by Bhante, who was staying there; and several laities, who were volunteering to do some maintenance work. We stayed for 2.5 hours before arriving back at VBG around 9pm. My heartfelt thanks to Ah Wong’s wife and Tan Khantipalo for this wonderful and surprise Christmas gift.

31 years after my last Dhamma class at SKE, I registered for another SKE Dhamma session. This time, the teacher is – none other than Bhante Hye! This is the first time Bhante accepted SKE’s invitation to teach, and I am glad that the dates worked out for me. My friends and relatives also participated in the Feb 15-17 Dhamma talk and meditation sessions, as well as meal offering. This, truly, is a prosperous (spiritual wealth) Chinese New Year 2019 for us.

When I heard Bhante said his early years of earnest striving was wasted as a result of following the wrong Dhamma, I can relate to it. I didn’t strive diligently, but I did waste lots of time reading and pondering on the wrong stuff. Bhante’s forthrightness in pointing out wrong teachings and views – and advice to investigate the Nikaya – helped dig me out of the hole. It took me 1.5 years to finish studying the 4 Nikayas, and A History of Indian Buddhism by Professor Akira Hirakawa (a book recommended by Bhante in a 2010 talk). My earlier confusions due to the conflicting teachings in Buddhism are now cleared up. As Bhante stated in his Liberation article, “But, if he needed a good friend (kalyanamitta) to assist him, he would now know how to look for a suitable one.” – this is so true – after going around in circles for 25 years, I started to look for the right resources for support and my practice is more fruitful.

Luangpor Dhammavuddho, thank you for setting me straight on this noble path. I am deeply indebted to you. The blind sea turtle has set its sight on crossing over to the farther shore… slowly, but surely. 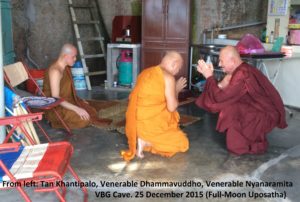 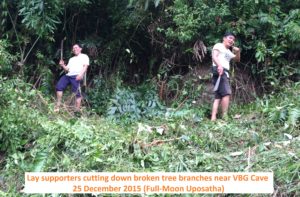