When I was very young, I remembered seeing monks on the road. I wondered about them. What were these people?

It was probably in 1988-89 that I read a book on Buddhism written by a Japanese. I found it on my father’s book shelf. It was an awe-inspiring book that had my tears rolling as I read it.

The book had a huge impact on me.

I started to search for other reading materials on Buddhism. That was the time when Vipassana meditation was very popular. I bought a little book on this topic written by Dr K Sri Dhammananda. I started meditating with instructions from the book.

Then at a beach party in Tanjung Bungah, I was introduced to John Ching. We started talking and found we had a common interest — Buddhism!

It was not common for teenagers to get connected through Buddhism during a beach party.

I remembered the good old John said, “I must introduce you to the real monks. They don’t accept money… they’re poor as beggars, go on alms round, and practise just like during the Buddha’s time….” I had no idea what John was talking about. But that got me hooked.

John brought me to Mi Tor See temple in Penang. There I met up with his gang. The gang leader was Huat Poh. He was cool and soft spoken. Other gang members were equally impressive.

Then came the monks. This was probably the first time I did some real food offerings to monks. I followed with the chants, but I was totally lost.

Everything that was happening was foreign to me. But it was interesting. I had the first glimpse of what John described as the real monks. Impressive.

Then on another day at Mi Tor See temple, I met with a no nonsense monk in a hut. He was busy wrapping books to be sent out. These were books written by him.

I did not stop there. I asked a few more questions and found that he stayed up the hills, in a cave. Wow this was something new to me! I was persistent and with a bit of luck, I got the permission to visit him.

He drew me the map to his cave.

I was young, strong, fit and adventurous. I took the map and managed to find the cave on another day.

The holy man in the cave was Bhante Hye.

The feeling was one of elation. It was like those ancient Chinese martial arts movies that I loved to watch, visiting the sifu (teacher) up the remote mountain, and the sifu would transmit his kungfu and internal energy to the obedient student. Of course the encounter was nothing of that sort.  Yet it was far superior than that. I was supremely lucky.

I would visit Bhante Hye almost every Sunday afternoon during my school holidays.

I would never forget those special and delighting time Bhante spent with me, patiently answering all the Dhamma questions I kept asking.

Bhante never seem to be tired or bothered that I took up so much of his time although he had much practice to do.

It was those questions and answers sessions that Bhante explained many aspects of Dhamma to me, and showed the true Path so difficult to meet and find.

It was one of those afternoon while I was walking down the hill, the thought arose in me that I felt as if the questions on Dhamma that I had at that time were cleared.

My life would be very different (most likely for the worse) if I had not met Bhante Hye. He changed my life.

Bhante spoke directly, and to the point. He was not afraid to point out those contradictions of the day against what were said in the earliest Sutta-Vinaya. Integrity was never sacrificed for popularity.

I remembered he told me that some of his early years were wasted because he followed some wrong teachings. And by revealing his mistakes, he hoped others would not fall into the same trap. I considered myself to be one of the very lucky ones as I was able to avoid those traps right from the start.

Just like a great classical music, there is a theme that Bhante keeps reminding, that is the earliest Sutta and Vinaya (for the fully ordained) are the best guides for our spiritual journey. The words of the Buddha are so important simply because the Buddha is the greatest spiritual teacher. There is no other teachers that can be compared to our Samma Sambuddha.

As advised by the Buddha himself in Samyutta Nikaya 20.7 : “… bhikkhus, you should train yourselves thus: ‘When those Suttas spoken by the Tathagata that are deep, deep in meaning, supramundane, dealing with emptiness, are being recited, we will be eager to listen to them, will lend an ear to them, will apply our minds to understand them; and we will think those teachings should be studied and mastered.’  Thus you should train yourselves.”

Another thematic variation we keep hearing from Bhante concerns the importance of Right View. And the best source for Right View is the the thorough investigation into the earliest Suttas.  This has far-reaching benefits — it opens up the possibility of propelling us to become a stream-winner, a Sotapanna.

Bhante keeps emphasizing not to waste this rare opportunity.  Many people do not realise how difficult it is to meet with the true Dhamma.  Samsara is too frightening and dangerous with its many drawbacks.  Thus, Sotapanna is the very least we should aim for in this very life.

And for full enlightenment, Bhante reminds that the jhanas are absolutely necessary.  Right Concentration is the four jhanas or one-pointedness of mind, as stated in the earliest Suttas.  This is the kind of meditation the Buddha praises where the four jhanas are attained (Majjhima Nikaya 108).  This is also the kind of meditation Bhante encourages us keep practising, and it has to culminate in the jhanas.

Many people find it a daunting task when it comes to the Suttas.  Bhante encourages us to investigate as many Suttas as we can in the earliest four Nikayas.  And we need to read, listen, discuss and contemplate on the Suttas over and over again.  Our understanding will slowly grow deeper and deeper. He likes to use the simile of the jigsaw puzzle that the pieces will slowly fall into place as we go along.

It will not be complete without the mention of Bhante’s amazing skill. When we asked questions, it was not surprising to hear his answers with references made to the Suttas. Sometimes it felt just like sitting beside the Buddha while listening to his answers with Sutta quotes. We were so lucky. What a privilege!

Now it is apt for a Digha Nikaya 31 quote: “When the Exalted One had spoken thus, Sigala, the young householder, said as follows: ‘Excellent, Lord, excellent! It is as if, Lord, a man were to set upright that which was overturned, or were to reveal that which was hidden, or were to point out the way to one who had gone astray, or were to hold a lamp amidst the darkness, so that those who have eyes may see. Even so, has the doctrine been explained in various ways by the Exalted One. I take refuge, Lord, in the Buddha, the Dhamma, and the Sangha. May the Exalted One receive me as a lay follower; as one who has taken refuge from this very day to life’s end.’”

To Luangpor Dhammavuddho, I bow down with my deepest respect and thanks. I am eternally grateful to him.

And not forgetting John Ching, my good old friend, to whom I am forever grateful. John was the missing link that appeared. He connected me to Bhante Hye. From there, the highest treasures were revealed — the Buddha, the Dhamma and the Sangha.

The hidden has been revealed. The lamp has been given. 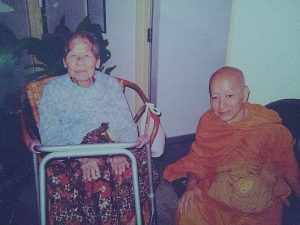 Down memory lane: Bhante Dhammavuddho with his old supporter T’or Tau Ee (Aunty Groundnut) to whose home he used to come for pindapata (and where the supporters gathered) during the years he stayed in the Penang Hill cave, i.e. end of 1989 till middle of 1997 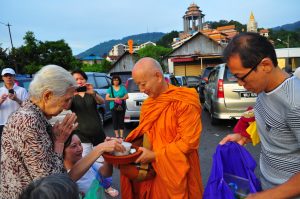 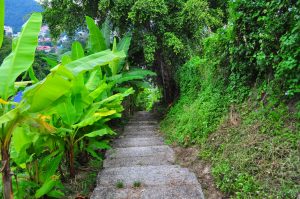 Along The Path Up VBG Cave 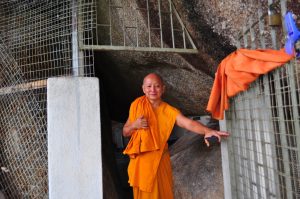 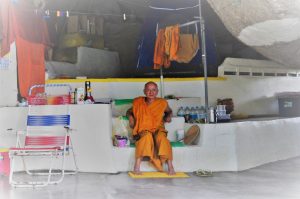 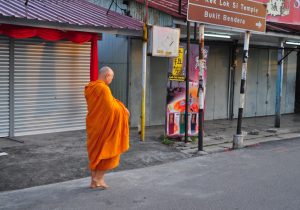 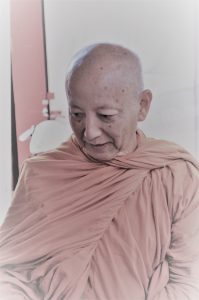 A Shot Taken During Dana At Air Itam Market, May 2014

« Luang Por, The Holy Father…
The Blind Sea Turtle And The Yoke With A Single Hole »