Bhante Hye Dhammavuddho is as the Thai title for elder monks Luang Por signifies, a holy father to us all. He has taught and imbued multiple generations of men and women the sense of right and wrong in life, morality, discipline, and above all the teaching of the Buddha – the Dhamma, some have gone forth to be monks themselves.

There are countless of people like me spanning multiple generations that have had the good fortune to come into contact with Luang Por, to be taught by him, to be set straight by him and to be instilled with respect for the good and the godly, in other words character building. How do I know? I remember my friends and me in our teens with gangly limbs and pimply faces kneeling in front of him at the Air Itam cave for a pic and 20 – 30 years later I see some other teens with gangly limbs and pimply faces posting pics with them in similar pose, kneeling in front of Luang Por in that same cave much as we have done a couple of generations past. Whenever I see pics like that, a smile never failed to appear on my face and I know Luang Por would have taught them principles, discipline of life and the Dhamma like he has taught me and my friends. Luang Por is, to many, the Dhamma teacher par excellence.

Vihara Buddha Gotama (VBG) the monastery is like a second home to many people young and old. I think hundreds if not thousands of people would have stayed there, learnt about and practiced Dana, Sila and Bhavana over the years. It is a monastery that was started by Luang Por and he is behind it as its tireless driving force constantly teaching, admonishing and lifting all that have gone through its gates. I am sure each of those people would have individually benefitted from Luang Por’s guidance as I have and each would have gotten a morsel of truth to bring back to their daily life in the outside world.

Luang Por sets a high standard for conduct and discipline for all that goes to VBG. He has always been a straight talker and a beacon of speaking the truth. Not for him are winding roads or beating around the bush. I remember being admonished and scolded by him umpteenth times when I did something wrong the times that I was there. This of course can be bruising for one’s ego but looking back all good teachers are like that – strict disciplinarians and any lesson worth its salt is not ego pleasing. I read the saying somewhere once that “it is in fire that iron is forged’.

I have been to stay in VBG and learn the Dhamma numerous times over the years in between work and caring for my parents as the single child.

One of my most memorable times there was when I stayed as a Samanera (a novice monk) for a month from 13th Jan to 12th Feb 2010. It was the most memorable one month in my life, where I learnt about the meaning of the yellow robe, the responsibility to be monk (novice), the discipline, etiquette and decorum expected of the holy order. I remember I had the tendency to drop the alms bowl or its metal cover in the beginning. The alms bowl is roundish, very smooth and we had to place it into a rope bag to take it around. I dropped the bowl or the metal cover when washing them (the soap makes them more slippery), I dropped them when wiping them dry and I also dropped them when putting them into the bag. Every time I dropped them I would get a scolding from Luang Por who would be walking by or doing something nearby. He said devotees with much reverence offer food to the Sangha in that bowl and you handle it so unmindfully. One day after a few times of dropping that bowl and cover, he told me ‘in Thailand if you dropped that bowl in front of a devotee’s house you will have to kneel down and chant the “Itipiso” 108 times’. I got what he meant, the alms bowl is accorded great meaning, respect and reverence and if I drop the bowl in front of a devotee’s house I will similarly and on my own accord have to kneel down and chant the “Itipiso” 108 times. I didn’t drop the bowl or its cover anymore after that out of reverence.

Many times have I thought of the alternative, that perhaps I would have gone on a wayward and immoral path in life if I didn’t have the opportunity to know Buddhism and Luang Por. I am very thankful to Luang Por Hye Dhammavuddho for his guidance in life as I am sure countless others and I wish that he is well and happy always and that he achieves enlightenment. 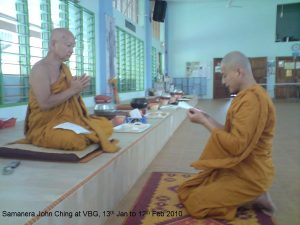 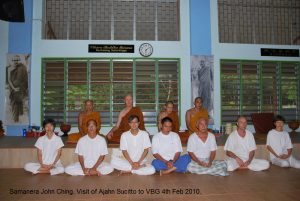