In honour of a true renunciant who kept to the Dhamma-Vinaya
By Piya Tan, Singapore
This article was first published at https://bit.ly/2Q2LnNu

Today, 24th December 2019, is the cremation day of Bh Dhammavuḍḍho Hye Mahāthera (1947-2019). He passed away on 22nd December after a short illness, leaving behind an impressive collection of teachings on Theravada Buddhism and many followers who look up to the Buddha Dhamma as he did–as an exemplary renunciant, a money-free and Vinaya-abiding forest monk caring for the Bodhi tree here.

LOCAL MONK
He is an excellent example of a Malaysian monk who worked all his life to plant the Bodhi tree in our own community. He was also a personal Dhamma friend, a junior brother monk then, whom I deeply respect.

He renounced in 1983 in the Mahayana order. Disillusioned, three years later, he left this order to become a Theravada monk. Of this experience, he recalled how the Buddha gave up Brahmanism to discover the right and true path for himself.

LAST TEACHINGS
Among the last teachings of Bh Dhammavuḍḍho (“prospering in Dhamma”) are those concerning the “soul,” the “astral body,” and the “last thought moment.” He is profoundly careful to present his teachings in keeping with the suttas, the early Buddhist texts.

Let us reflect on these teachings and DEDICATE THE MERITS rejoicing towards his awakening, and the well being of all those who are continuing his work and are inspired by him in growing local Buddhism to share globally.

SOUL
In at least 8 public talks, including those given in Singapore and in Athens, Greece [see below], Dhammavuḍḍho explains how he views the “soul”-idea and how we should understand it in accordance with the suttas.

(1) OXFORD ENGLISH DICTIONARY
He quotes the OED (Online): “A soul is the spiritual or immaterial part of a human being regarded as immortal.” Dhammavuḍḍho stresses that early Buddhism does NOT say that it is “immortal” but simply see it as the “immaterial part of us.”

Dhammavuḍḍho then gives 6 teachings relating to the idea of that “immaterial part of us” that we can call a “soul” in the sutta sense. He carefully quotes the relevant suttas by their reference numbers.

Once the gandhabba descends in the womb (he uses “the egg”), gestation starts. His point is that there is such an external “immaterial” being. This we can call a “soul.”
[SD 7.10; SD 40a.2.]

(4) The Dhānañjāni Sutta (M 97,6-15) relates how “hell wardens” drag bad-doers to hell. The point of this story of facing one’s karma, Dhammavuḍḍho points out: it is not the physical body that suffers hellish pains, but an “immaterial” being that we can call a “soul.”
[SD 4.9]

(6) Finally, Dhammavuḍḍho refers to the sutta teaching of THE 5 REALMS [such as in A 9.68]:
The hells, animal, pretas, humans and the devas.

Of these, only 2 are physical (humans and animals). The other 3—the hells, pretas (departed ghosts) and the devas—are “spirit” [immaterial] beings, not of flesh but with a “fine” body. This can be called a soul. Dhammavuḍḍho adds that these are the 4 MENTAL AGGREGATES (feeling, perception, formations, consciousness).
[SD 2.20]

LAST THOUGHT MOMENT
According to Dhammavuḍḍho, the suttas do not support any idea of the “last thought-moment” deciding the quality of our rebirth. This is a teaching found only in the Abhidhamma and later (commentarial) ideas.

According to Dhammavuḍḍho, our mind conditions our thoughts; our thoughts condition our actions; actions become habits; habits determine our character; and character determines our “soul.”

The mind is most important. We may have a human body, but a deva “soul” or a ghost “soul” may be inside our physical body even now (that is, our mind or mentality). When we die, we are reborn as that deva or that ghost.

ASTRAL BODY (mano,maya,kāya)
Dhammavuḍḍho finally quotes D 2 (87-88, Sāmañña,phala Sutta), how the Buddha describes, in his deep meditation, he is able to creat another “mind-made body” (mano,maya,kāya) that looks just like his body, what in popular lingo is called the “astral body.” This can be called a “soul.”
[Dhammavuḍḍho says that the “mind-made body” emerges from the crown, which is not mentioned in D 2.]
[SD 8.10]

CLOSING COMMENTS
Dhammavuḍḍho’s usage of “soul” for the mind, the mental aggregates and rebirth-consciousness is neither new nor controversial. Even in Thailand, the word “winyaan” (Thai word of viññāṇa) is used in just this sense.

Of course, such terms are defined in accordance with the suttas. Neither the “winyaan” nor the “soul” is an eternal being or abiding self, but a simple conventional word for those aspects of our being that are NON-PHYSICAL in a living process rooted in impermanence, unsatisfactoriness and non-self.

In short, Bh Dhammavuḍḍho has helped to update the modern Buddhist vocabulary so that is easier for us, especially those using the English language, to relate to Buddha Dhamma at the core our being. We can live and experience the “soul” of Buddhism.

Thanks to Rahula Thor for research assistance. 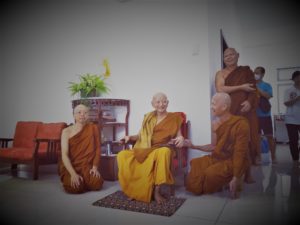 12th Oct 2019 : Luangpor Dhammavuddho was in Penang for treatment. He was staying at Sangha Lodge and was already very sick and weak. 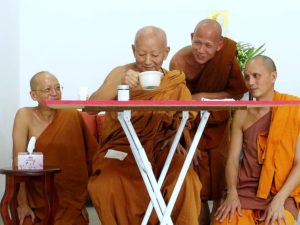 Luangpor Dhammavuddho at Sangha Lodge, Penang, in October 2019. His sickness was deteriorating very quickly then.