My most vivid memory of Bhante Hye was during the early days of VBG, Temoh when there were only a few kutis, and Bhante’s kuti became the centre of activities (talk, meditation practice and meal dana). We were there as yogis during Wesak eve, and surprisingly there was no Wesak hustle and bustle, no Wesak talk and no hint of celebration. Came Wesak day, it was just calm as any other days, only us yogis and a few lay devotees who came for dana. It became sweep the-leaf-day for us on Wesak that year (most likely 2002, and yes, we were happy sweeping the many leaves along the pathways at VBG).

I stayed back as the only yogi for another day. And that meant I had the opportunity to embark on the ‘impossible mission’ to prepare breakfast for Bhante and another monk that morning (knowing my limited skills, you would know why it was quite a task!)

Somehow I managed it, and after that I joyfully returned to the subsequent task of sweeping-the-leaf (again). Reflecting on the experience (of breakfast prep), it was indeed a privilege that I had back then to do what I could to serve a teacher.

Over the years, we saw how VBG grew to what it became today – more buildings and greater facilities. I visited VBG less and less, and only met Bhante once in a blue moon. The last talk that I attended of Bhante was at SJBA in 2017 – Bhante recognized me and smilingly commented that I should go exercise more, suggested that VBG would be good as devotees would hike up the hill to clear the water tank once a fortnight. Opps…that was Bhante’s way of hinting that I have grown chubby and needed to buck up (hehe).

When Bhante fell sick, I hesitated on the next move, hoping that Bhante would eventually get better. But things were not meant so, and upon the encouragement of a kalyana mitra, I hauled up a car-load of friends to make the road trip to Ipoh on a weekday. I caught a glimpse of Bhante in emaciated form. Bhante could still talk softly, and his face was as radiant as ever. It broke my heart to know that I would be physically paying last respect to him, my teacher, this life.

We received the news of Bhante’s passing during BUBS retreat with Luang Por Sucitto after the night talk on 22 Dec 2019. I could not help but have tears streaming down the face as we did the closing chant and sharing of merits.

Thank you for your kindness, Bhante. Back then and as it is now (even in your passing), I have received nothing but kindness and compassion from you. May you attain the bliss of Nibbana the soonest possible.

‘To meet, to know, to love,
And then to part is the sad tale of many a human heart.
Love isn’t love, till you give it away.” ~ Luang Por Waen Sujinno 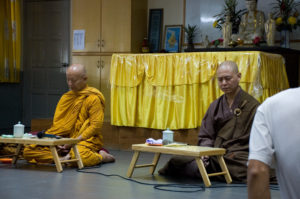 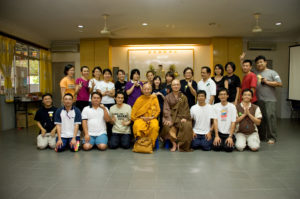 « Dhammavuḍḍho And The Soul
Honor To Him , Our Venerable Father »