It has been almost 5 months since our Venerable Master has left us. Though he is no longer with us, I’m convinced that his teachings has enlightened many of us, leading us to the real Dhamma and showed us the true path to enlightenment. Besides, I’m certain that his teachings have changed our views towards Buddhism. In this article, I would like to relate some of my priceless experiences with our late Master Venerable Bhante Hye to honor him and to share with you all on how he has changed my life till now.

I first got to know Bhante in 2011 when I was about 19 years old then. I knew him via my maternal uncle who was a member in BSI( Buddhist Society Ipoh). He introduced me to Bhante at that time as I was very interested in Buddhism after exploring other major religions such as Christianity,Hinduism, Taoism, Sikhism, and Islam. In one of Bhante’s video in youtube, he mentioned that in his younger days he too, used to ask questions like “ Is God really compassionate and loving?” , If “yes , then why did He create Hell?” and “What is my purpose in life?”. After viewing some of his videos on Youtube, I was immediately inspired by faith as I too, have frequently asked such questions since I was 18. One of the life events which probably triggered me to ask such questions regarding the concept of “God” was because when I was 18, I received news from a friend that one of our good friend passed away due to a tragic event. He was found drown in a waterfall. That immediately struck my mind on how fragile life was as I just met him few months ago. So I started asking questions and this event probably triggered my sense of samvega and despair in life. However I was still having a lot of doubts about Buddhism at that time, thinking that it might not be able to answer my doubts in life.

When I first met Bhante in VBG, he gave me two of his books titled “ Message of the Buddha” and “Only we can help Ourselves.” These were the two books which inspired and gave me confidence in the Dhamma. So I made a resolution that everytime I come back to my hometown in Kampar, I will definitely come for a retreat in VBG during each semester break.(At that time I was still an undergraduate.) After lunch Dana whenever I was staying there for a retreat, I will start asking him questions and he would give me some Dhamma teachings. The most vivid teaching that I had from Bhante was that after every Q &A session he would tell me not to believe but he says immediately but to compare his teachings with the Suttas, thus making me contemplate the Kalama Sutta indirectly. My faith grew even stronger.

The Dhamma was my guidance throughout my ups and downs in medical school. Whenever I performed badly or aced in my exams, I would contemplate on the Dhamma, telling myself “No matter how bad or how good the situation is, it will soon pass. It’s impermanent. Don’t attach to it.”

During my free time, I would spend my time reading books written by Bhante such as “Mindfulness, Concentration and Recollection” and “The 5 Illusionists” etc and also listening to his Dhamma Talks via the microUSB player.

I could also remember how Bhante taught me meditation on the breath ( Anapanasati) back in 2013. Like most of the well respected Thai Forest masters who practise reciting “Buddho” “Buddho” as a method to anchor the mind, Bhante said in his personal practice he preferred the word “Arahang” “Arahang”, so ever since then I started reciting this “mantra” as a meditation word to make the mind one-pointed as I was still a beginner.

I had my last retreat in July 2017 for about a week before I was posted to Penang for my Housemanship training. However I was still in touch with him for the next 2 years and I would pay respect to him whenever he comes to Penang. The 2 years of training as a doctor had really push my limits. However, I am thankful to have the Dhamma to guide me whenever I feel lost when facing situations which deal with lives and death everyday. Like what Lord Buddha said : Birth, Ageing, Sickness and Death are stressful. These reflections were even more apparent for me after I started working.

Fast forward to Year 2019, it was also a tragic year for me when I first learnt about our Venerable Master’s medical condition around early August 2019. At that time I was really in disbelief and denial as well. I had to admit that even though I had been learning the Dhamma for the past 8 years, I was still an amateur. I started having irrational thoughts like “Bhante is such a Noble Dhamma Practitioner, how could he succumb to such illness?” I was very disturbed at that time after he broke the news to me himself. I even cried at times when I thought about it everytime and it took me almost 2 months to accept the “tragic” news.

After much contemplation I reflected that even The Blessed one is a subject to birth, ageing, sickness and death , thus suffering. Even though The Enlightened Ones succumb to physical suffering, they do not succumb to mental suffering at all. I finally realised that I was suffering indeed because of attachment towards our Venerable Master, as he was very much like a Grandfather to me. In fact, his physical appearance did resemble my own paternal grandfather.

For the remaining months before his demise, I would accompany him every time he goes to the hospital for treatment. I paid my last respects to him 3 days prior to his passing away in his kutti, knowing that he would pass on anytime soon as his health was failing. Nevertheless, even though his physique is gone, I am assured that his teachings would remain as a lamp for us to attain the highest goal of enlightenment. Till now whenever I listen to his audio recordings on Dhamma Talks, I would shed tears occasionally as if he was actually in the present moment, sitting in front of me teaching the Dhamma.

To conclude this article I would like to express my utmost gratitude again to our late Master Venerable Bhante for showing me the true path of the Noble Ones in this lifetime and for that, I am forever grateful for his teachings.

Thank you and Sadhu Bhante for showing me the meaning of my life. 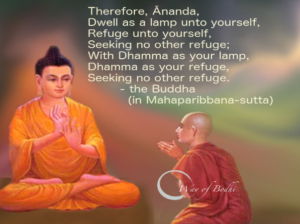 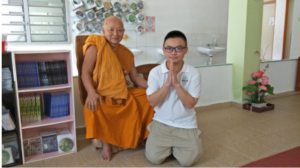 A photo with the late Ven.Dhammavuddho in July 2017 before I started working 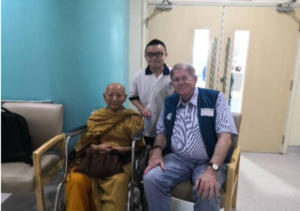 A photo of Ven Dhammavuddho( left) and Mr Ward Caartier, a voluntary worker in the hospital who is also a cancer survivor. He was delighted after receiving some Dhamma teachings by Ven Dhammavuddho