I was invited to join this tribute website for Luang Por Dhammavuddho also known as Bhante Hye. He was the youngest son in a family of eight children, six girls and two boys. Bhante used to say that we were lucky to be in a poor family as we had the right training from the time we were small. Our father was a clerk and mother was a devoted housewife, who spent her whole life feeding and looking after us. Bhante was a filial son who always had his parents at heart.

Since the time when Bhante became interested in Mahayana Buddhism, somehow my sister Shirley and myself (now Ven Gotami) – were inclined to follow whatever he does. We also became vegetarian and we stopped the traditional ancestral worshipping practices of our parents. Then when he eventually changed to Theravada Buddhism we also did the same. And even when he went to America to ordain, we continued to be loyal Buddhists. I guess you could say we were his first two disciples.

Before I speak about his life as a monk, I would like to share with you two stories from our childhood.

Story 1:
“Tak-Pong, Tak-Pong,” the sound of chanting accompanied by drums from a distance. When I hear that my ears prick and I was saying that there is a Malay wedding. Whenever there is a wedding the bridegroom accompanied by a group of young men all dressed in their best attire and playing the drums, will parade to the bride’s house. In front of her house one of the men will do the “Bersilat” or a hero’s dance to the delight of all their guests, before entering the house. As I run to the Malay kampong (village), with my ears alert I locate where the sound is coming from. My little brother (Bhante) ran after me. And as we were running behind people’s houses suddenly his foot slipped into the drain. When he lifted up his foot there was a rusty nail hanging from it. An old neighbour from that house, kindly took him in to clean his wound and put a bandage for him. Then we continued. Because the drums were going on we know exactly where the sound was coming from. We made a beeline to the house to witness the wedding ceremony. The bridegroom enters the house and sits on the bridal dias together with the bride, who has her fingernails and toenails newly painted with turmeric. They then perform the wedding ceremony.

Story 2:
Our landlord’s house was quite nearby, maybe about fifty metres from our house. They were wealthy and every Saturday enjoyed a movie on a projector in their house. We at home, will be on the lookout from our house through their window, with eyes so sharp and ears so clear and when we can see movement we know that there is a movie going on in that house. Without any hesitation we run helter skelter towards their house, with my older brother and my little brother (Bhante). My older sisters were much older and would be shy to do what we did, but the three of us had no shame. We ran towards the landlord’s house straight into their lounge room and sat on the floor. Our eyes only on the screen. The landlord’s sons were very kind and did not ask us to leave. We did not look at anyone, only glue our eyes to the movie. As if it was our right to be there. When the movie was over, we ran out of the house as fast as when we ran in. We did not even take the trouble to say “Thank you.”

Bhante started practicing the spiritual path many years ago while he was working. He followed the Mahayana Buddhist practice as a vegetarian and was meditating and keeping the eight precepts daily. He used to spend all his leave from work as a guest in the temple of The City of Ten Thousand Buddhas in San Francisco, USA. Our father was concerned that he might be interested to become a monk so in the course of conversations when he knew that he was going to become a monk, our father’s eyes became red. Bhante noticed that and made a resolution that he will wait until our father has passed on. At the age of eighty-two our father died of a weak heart. On reflecting about mum he wondered if she would live as long as our maternal grandmother who died at the age of 103. So if he should want to wait for her it might have been too long a wait. At the age of 35 he resigned from his work and sold his property. He prepared to travel to the United States to ordain as a monk. Mum was sad at seeing him go so far away but it was something that he had to do. After staying there for three years he felt disillusioned and decided to leave the monastery. He came back to Malayasia and from there he went to Thailand to re-ordain as a Theravada monk. He spent a lot of time in solitude staying in a cave. He noticed that there are big round holes on the ground and on enquiry he was told that large snakes stay underneath. He could even hear them slithering by at night. He was told not to switch on the torchlight otherwise they will stand up. He also stayed at Wat Pa Nanachat.

After a few years in Thailand he returned to Malaysia. With the help of a supporter he found another cave at Simpang Pulai in Perak. From there he could walk to a wet market for alms. A shoemaker whom he met at the market used to visit him at the cave and he built a bathroom and toilet for him, as well as a gate. He stayed there for four months. He decided to go to Penang and there he found another cave. This cave was quite open and not a real deep cave, it was very bright. An old lady staying nearby had her house open for Bhante to receive Dana. I used to bring our mother there and she usually waited for us at the old lady’s house, while we climbed up to the cave.

Later he decided to start a monastery and with the help of a layperson who took him to view many areas before deciding on a piece of land that was 15-acres. It was really tough work at the beginning, but he stuck it out and people also came to help him. Even building the monastery there were a lot of problems, which he had to undergo. Not wanting his mother to miss out on his early talks, he used to send them to her. He spoke in English interjected with some Hokkien and some Malay words. Mother used to say he speak “rojak,” (a Malaysian spicy assorted fruit salad).

The years passed on and mum became more disabled, Bhante used to visit her whenever he can. She was living with our older brother. Sometimes he would get a lift from a lay person or he will take a bus and my older brother will go to the bus station to pick him up. After spending two days with mum, our older brother will send him to the bus station to return to Vihara Buddha Gotama (VBG). Finally at the age of 100 it was time for her to go. Bhante was the last person sitting beside her, making her feel at peace and at ease, until she finally fell asleep. He travelled back in a bus to VBG, half way along the journey he received a call from my older brother that mum passed away. He returned the next morning. So even though mum was worried when he left for America to become a monk, but in the end he was the one who was with her during her last moments.

In 1989, my sister Shirley and her family and my family migrated to Perth, Australia. In 2005 my husband died and four years later I became a nun at Dhammasara Nun’s Monastery. When I was thinking of ordaining, I visited Bhante to ask him to suggest a Pali name for me. He gave me a book and asked me to see which name I would like. I wasn’t familiar with Pali and I really didn’t know what to pick. So I asked him again to pick for me. Which he did, he said the name “Gotami” starts with “Go” which sounds like our family name “Goh.” This name means “distinguished daughter.”

After coming to Australia we did not have much contact with Bhante but he used to send SD cards with his teachings, through people from Perth who visited his monastery. I listened to his talks and was very much inspired by what I heard. I shared these recordings with the other nuns and many of them also enjoyed his teachings. One of our nuns told her father to invite Bhante to his temple in Indonesia to give talks. That was for the 2019 Vesak day but at the time he had too many invitations. He was supposed to go for the 2020 Vesak but could not as he became sick, so it was one year too late. He died on the 22nd of December, 2019. When he was invited to give teachings in Greece I felt, my little brother has become great, tears of joy rolled down my cheeks.

There was a young man from Bangladesh who happened to listen to him on Youtube and was so inspired that he immediately changed from Hinduism to Buddhism. He is now a monk. Even one of our Anagarikas when she was in Melbourne she used to listen to his talks for years. Many visitors that came to our monastery have told me that they were very inspired by Bhante’s teachings on Youtube. Bhante himself said that people come to him to thank him for getting them out of their depression and also people with panic attacks got over that through listening to him.

Through Bhante’s determination and persistent effort he managed to excel in his teachings. He had truly benefitted himself and as a result of that he was also able to benefit many, many others. Not only in his homeland but in places far and wide wherever he was invited. He did a great service for Buddhism. Bhante’s love for the Buddha and his Dhamma propelled him to dedicate his whole life towards spreading the Buddha’s words. His talks are in a few languages – English, Hokkien and Cantonese. His good friends translated them into Mandarin. To quote Bhante “even the old aunties who don’t understand English can listen to the Buddha’s suttas in their own dialect.”

During the last week of Bhante’s life, when he returned to VBG from the Kinta Hospital, we also followed him back to VBG. The morning after Bhante’s passing when I opened the door of the nun’s residence, I was greeted by the sweetest fragrance of the freshest flowers. That was the only day that this happened. There wasn’t any flowers around there and I have never experienced this before. I am proud to have him as my brother and treasure this experience. 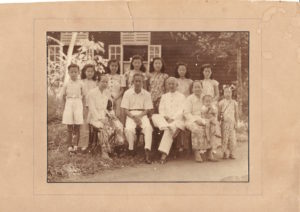 The Goh’s family photo: Both my parents were sitting in the front row, with Bhante sitting on my mother’s lap. I was standing next to him. At the back row (from the left) were my older brother, second sister, cousin, Shirley (fifth sister), followed by other sisters. Our family home was in the background of the photo. 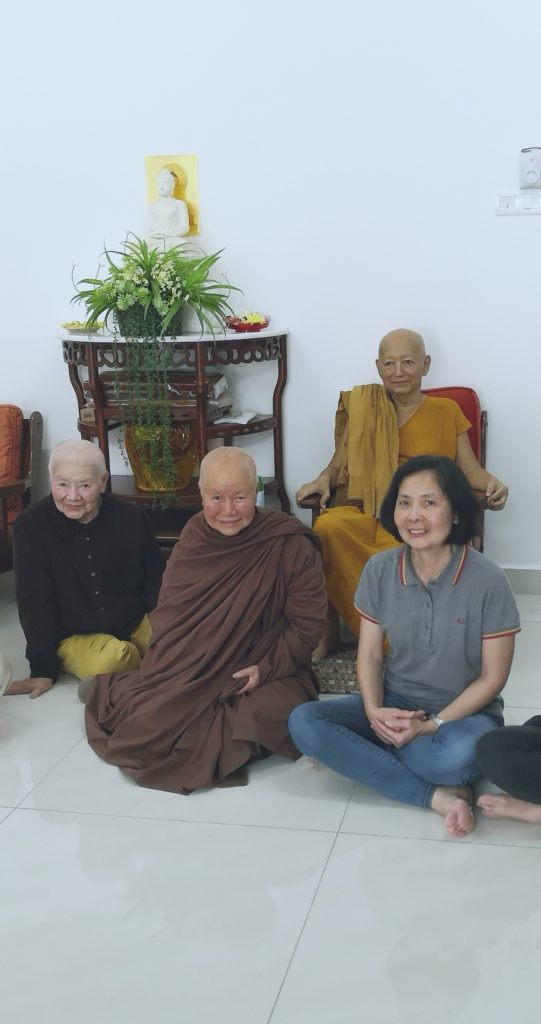 My fifth sister, Shirley, was on my right and her daughter Kim Chin on my left. It was taken on 5th Oct 2019 at Sangha Lodge, Penang, at a time when Bhante’s health was deteriorating very quickly.

« Honor To Him , Our Venerable Father
Luangpor Dhammavuddho Described His Practices In The Dhamma-Vinaya »